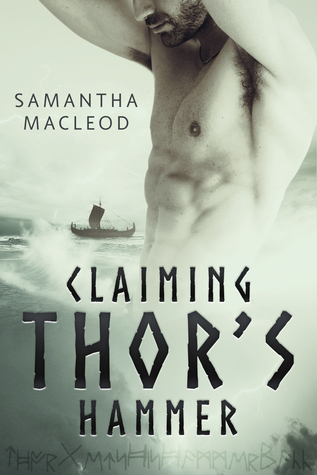 All of Asgard depends on Thor, and his legendary hammer Mjölnir, to protect them from their foes. So when Thor returns one night without his hammer, refusing to say how it was lost or where it may be, all of Asgard is at risk. Loki tracks Mjölnir to the muscular arms of the fearsome warlord Thrym, who reluctantly agrees to a deal: Thrym will return Thor’s hammer in exchange for Freyja, the most beautiful woman in Asgard.

There’s only one problem with Loki’s plan. Freyja refuses to marry the ruthlessly handsome Thrym. Low on options, Loki insists he can still retrieve the hammer. All it takes is wrapping Thor in a wedding dress obnoxious enough to allow him to pass for Freyja.

They say the only absolutes in life are death and taxes. I’d like to propose another—death, taxes, and Samantha MacLeod producing entertaining literature.

I always enjoy reading MacLeod’s interpretations of myths and the characters in them, so I was eager to pick up a copy of this book when it hit the “shelves”. I think it might be a new favourite. I loved the character of Loki in MacLeod’s The Trickster’s Lover, and getting to see another side of him was quite simply a delight. Thor was hilarious, as he always is in her work, and Thrym was unexpectedly awesome. It’s funny to think about the behind-the-scenes possibilities for these myths and Claiming Thor’s Hammer takes a creative twist I certainly wasn’t expecting, but god damn did I enjoy.

Let’s talk about the writing for a hot minute. I know, I know, but the sexy stuff is gonna have to wait. I’m always impressed by how well MacLeod balances description and narration, and I’m especially impressed by how concise but evocative her descriptions are. Her style just works for me. She could write a shoe catalogue and I’d be into it, but the stories she chooses to tell are always so goddamn interesting. I normally don’t pick up MM erotica/romance but I was entertained from start to finish.

And the sex? Just the right amount of buildup for a book this length and then BAM, sexy times. Not too much, not too little, and well-written the whole way through. It’ll get you hot under the collar and leave you wanting more, which is convenient since MacLeod has just released another MM romance that I’ll soon be diving into headfirst.

Treat yourself to this short and raunchy read and you won’t regret it!

One thought on “Review: Claiming Thor’s Hammer by Samantha MacLeod”