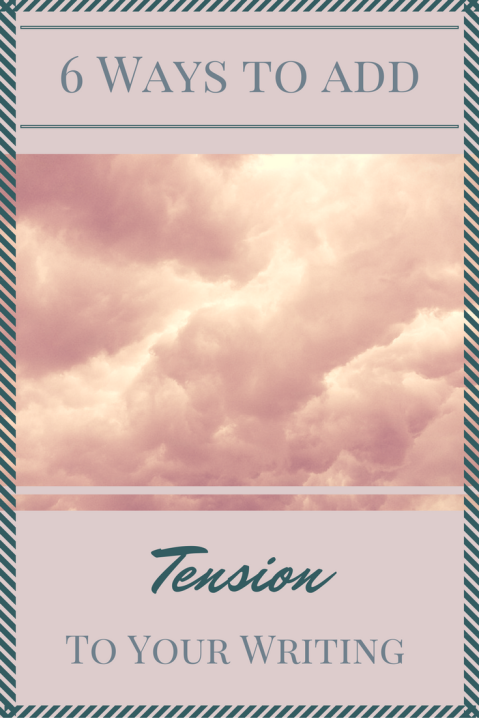 One of the things I struggled with most when moving on to write novels from novellas was the task of how to keep the plot alive between major conflicts. It’s no easy task, either. You can write all day until the cows come home, but unless your readers are engaged with what you write, it won’t matter that there’s a chilling climax to your story. They simply won’t get there.

The solution? Tension. Around every corner, beneath every staircase, hiding behind every shower curtain. Here are six ways to add a little tasty tension into your writing.

1. Create conflicting goals for your side characters

It’s easy to get wrapped up in your protagonist, or your hero and heroine, but don’t forget that your other character

s are people too. They don’t know that the love story of the century is unfolding right in front of them. All they know is that they’ve got a class to teach, and the boy who just burst into their class during the final exam is being disruptive. Don’t forget about what’s going on in your side characters’ heads during each scene. You don’t have to show it, but keep it in mind.

Okay, okay—using the weather as a way to foreshadow and build tension has been done many times before.

But I’m not talking about writing, “It was a dark and stormy night.” I’m talking real environment based conflict. Before your protagonist can begin her quest, maybe she has to shovel snow from her elderly grandparents’ driveway. Maybe your hero and heroine get stuck together in a lashing rainstorm and have to cuddle together for warmth under the eaves of an abandoned cottage. Maybe it’s a beautiful, sunny day—a problem for your vampire protagonist who has to journey across town.

3. Don’t make it easy for your characters

This is the golden rule. I know you love them. You don’t want to hurt them. They’ve already had such a hard go of things. Maybe it’s okay to give them a little bit of a break? No! This is the story of their struggle, my friend. There are no free rides. Throw something crazy out of left field for them to deal with. Injure them. Scare them. When it’s time for their happy ending, they can have it. But until then? Put your babies through hell.

4. Take things from your characters

Along the same vein as the previous tip, don’t have the ingredients for your characters’ happy ending on hand.

Wouldn’t it be convenient if your hero already owned the priceless gem needed to break the sleeping spell placed on his lover? Yes. But wouldn’t it also be convenient if he didn’t have it, but was able to steal it from the museum it was housed in? Yes, because he still winds up with the gem. But what if it were a fake? Or it got stolen? Or he lost it? Or maybe in order to get it he had to give up something else valuable? Just because a goal has been accomplished, doesn’t mean the journey’s over.

For those who don’t get the reference, I’m talking about that delightful early 2000s song in which the oddly paired pop duo only had four minutes to save the world. Don’t be afraid to put your protagonist on a time crunch. Things get more interesting when there’s a ticking clock. As they say, “No hesitating. Grab a girl. Grab a boy.” Or something like that.

6. Take failure from bad to worse

What are the consequences for your heroine if she fails her mission? Whatever they are, make them worse.

Nothing inspires nail biting more than dire consequences. It’s interesting if your heroine has to find a killer before he kills his next victim, but it’s more interesting if that victim is her best friend. It doesn’t have to be on such a life or death scale, either, but there should be a huge, motivating force behind the actions of your characters. Maybe one academic misstep could lead to your hero getting kicked off his college football team, but that’s been done before. What if making it big in football is the only way your hero can pay for his father’s staggering medical bills and keep his beloved old man alive? Think about it. (And hey, wouldn’t it be even more interesting if he also sprained his wrist?)